In the sea around the world a phenomenon occurs which results in the most gorgeous blue sparkly stuff you can imagine.

Noctiluca – also known as ‘sea sparkle’ – is neither plant nor animal, but a single-celled planktonic organism called a dinoflagellate, which ingests other plankton. With diameters typically of about 0.5mm, dinoflagellates are hard to see with the naked eye. But when they bloom en masse – often due to excess nutrients in the water – they can form a red slime.

At night, however, when these tiny organisms are disturbed by movement, such as footsteps or pounding surf, they emit a brilliant blue glow.

Light is produced by the compound luciferin, which in dinoflagellates is derived from chlorophyll, the chemical plants use to turn light into food.

According to Scripps Institution of Oceanography in California, the light flashes from individual dinoflagellates (which together form the overall glow we see) startle their main predators, also tiny organisms. These also act as a ‘burglar alarm’ attracting even larger predators to pick off Noctiluca’s primary predators, copepods (small crustaceans).

The spread of sea sparkle is also linked to climate change. Before 1994 they’d rarely been seen around Tasmania, But as waters have warmed, this has become one of the most common places in Australia to see them. 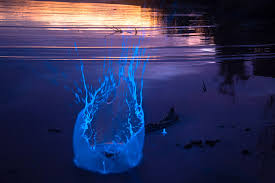 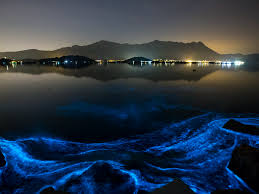 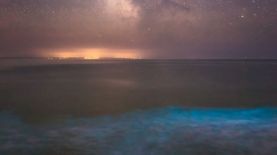